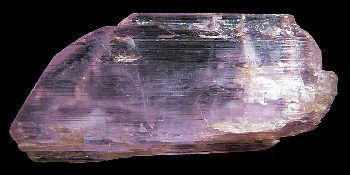 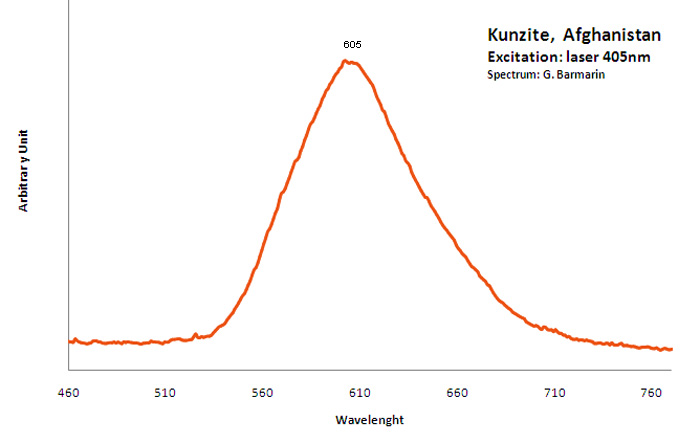 The phosphorescence of Kunzite was discovered by G. F. Kunz himself in 1903. Baskerville also studyed Kunzite luminescence in 1903. Extended studies were later made on the spectra of Kunzite by Pochettino and by Nichols who found that the fluorescence emitted light was polarized. Nichols also describe the fluorescence emitted by electron excitation as two bands : a strong broad band  from 515nm to 690nm and a weak one extending from 420nm to 480nm. He also pointed that the band around 600nm have a strong phosphorescence and the other band have none. Nichols studied the thermoluminescence at 325°C and found that it was not polarized. The thermoluminescence ceased at 400°C.

At 20°C the peak around 590nm is nearly symetric being somewhat steeper toward the violet. On cooling to -180°C, the fluorescence color  becomes much redder to the eye but the spectrum show no resolution into narrow bands (DeMent 1949)

Tanaka (1921-1932) demonstrated that the most important activating agents wich cause the luminescence of Kunzite is Manganese. However, he stated that Samarium and Ytterbium had a role as activator. In the Kunzite from Pala, Ca, USA, containing a few tenths of a percent of manganese, he found in the bright orange light emitted by fluorescence 12 manganese bands,  4 samarium bands and one thallium band.