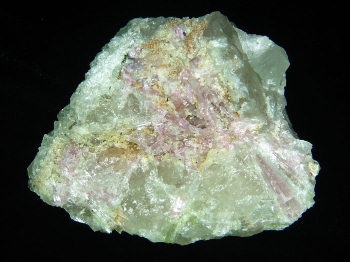 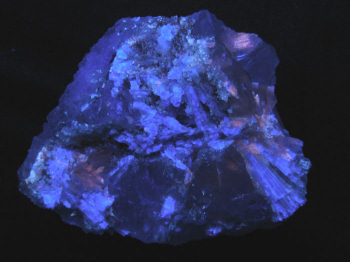 Watermelon tourmaline of the Dunton Gem Mine shows luminescence of the red core in intense sky blue.

In practice, all Dunton Quarry gem elbaite fluoresce. Although worldwide elbaite does not usually fluoresce, several Maine localities have this characteristic, but few localities have such a high proportion of their elbaite that is fluorescent. Elbaite from Newry with lepidolite replacement may have a creamy yellow fluorescence in both short and long wave UV due to the lepidolite's fluorescence. (see: http://www.mindat.org/photo-188642.html )

The activator is unknown, but achroite contains Mn and a large amount of Mg (15-20%); however, many tourmalines can contain as much Mg without fluorescing.

Very small crystals embedded in quartz are only detectable by their strong fluorescence.